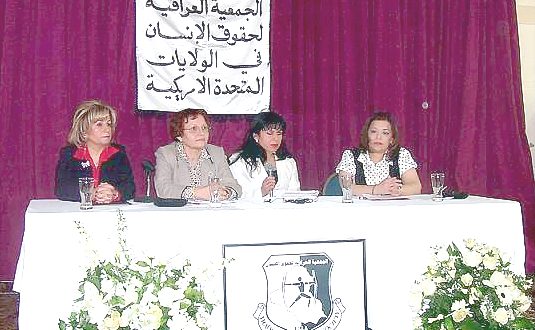 Violence and the Iraqi Woman In honor of Woman s Day and to support her civil rights in Iraq, the Iraqi Human Rights Society in the United States presented a public conference entitled  Violence and the Iraqi Woman

Mrs. Samira Kory, treasurer of the Iraqi Human Rights Society in the United States, welcomed the various political Iraqi parties and the numerous other Iraqi organizations and media outlets. Then she called for the attendees to take a moment of silence to acknowledge the Iraqis who have died for freedom. She also gave a brief mention of the harsh and sad circumstances the Iraqi women are currently facing. She requested that the Iraqi Parliament recognize the importance of placing new laws that would take care of the Iraqi woman and secure her rights in order that she has a role in building the committees and government of Iraq.

Dr. Sundus Amara, a member of the Iraqi Human Rights Society in the United States, discussed the significance of women s roles and the importance of providing for women complete protection in order that they take their appropriate and natural role in the community. She also noted the sacrifices that Iraqi women have made in the past years   and continue to make today.

Weam Namou, researcher and president of IAA, brought attention to Iraqi women s suffering and presented a number of realistic solutions available for them. Having contacted various international peace organizations, she requested that they assist the Iraqi women s dire conditions. She expressed the importance of Iraqi woman to advance herself through self-teaching and by making positive contributions and involvements that would help build the family and society.

Dr. Katrina Mikhael focused on the number of killings and injured women and children in Iraq since the fall of Saddam until now. Additionally, she discussed what the Iraqi woman is exposed to  from the overwhelming threats and killings and being forced to veil to the armed militias and the terrorists in the diverse Iraqi provinces. She shared information about the obvious killing and suicide occurring in the colony of Kurdistan, which is somewhat due to the fundamentalist parties and the old mentality that exist in that region. And she requested for the Iraqi government and parliament to take tangible steps in correcting the Iraqi constitutional amendment in regards to women in order to help give her back her human rights.