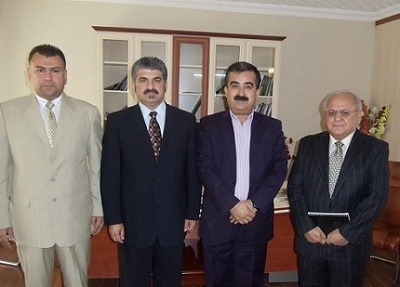 The Delegation of the IHRS met the official NGO

The Delegation of the IHRS met the official NGO

Mr. Barzan Ahmed Korda, official of the civil society organization (NGO) in the province of Sulaymaniyah, received Mr. Hamid Murad, president of the Iraqi Human Rights Society (IHRS) in the United States on the 11/2/2011 in the city of Sulaymaniyah.
They discussed the issues concerning the situation of human rights in Iraq and in the Kurdistan Region in addressing the common issues and the work of civil society organizations. They mentioned the need for joint cooperation between the two organizations. Mr. Hamid Murad focused specially on the subject of displaced people who fled the hot spots to the province of Sulaymaniyah (Arabs, Kurds and Turkmen, Christians and the rest of the components). Mr. Barzan Ahmed Korda gave the attention to the role of the civil organizations and its importance in creating an appropriate atmosphere among all the circles of the Iraqi people under the universal culture of human rights, peaceful coexistence and rejection of all forms of violence and extremism. This meeting was also attended by Mr. Karim Albasri official branch of the IHRS in the Kurdistan Region and Mr. Carzan Khanequini IHRS member.

the Iraqi Center for peaceful coexistence

Mr. Majid Karim Mohammed, head of the Iraqi Center for peaceful coexistence in the city of Sulaimaniya, met with the delegation of Iraqi Human Rights Society in the United States, which included Mr. Hamid Murad, Karim Albasri and Carzan Khanequini. At the beginning of the meeting, the delegation of IHRS congratulates the directors of the Center for their efforts in providing aid and services to the displaced people in the province. Mr. Majid Karim called to the need for cooperation between the Center and the IHRS to exchange experiences and establish joint activities, and then he provided an overview of the goals and aspirations of the Iraqi Center in order to create opportunities for co-existence and spread love and tolerance, peace and brotherhood in the ranks of Iraqi society. This meeting was also attended by Sarmad Mohammad Sharif and Adel Qasim Abd -Alhussein members of the Iraqi Center for peaceful coexistence. 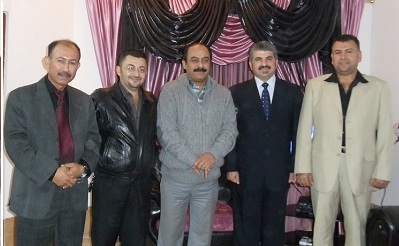