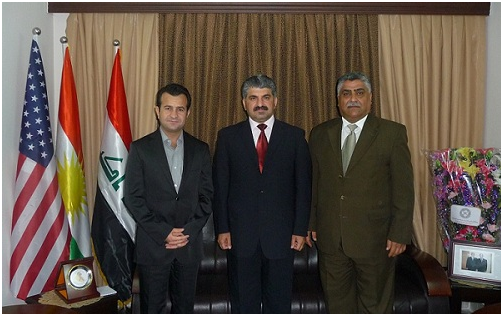 Yesterday in the headquarters of the Iraqi city of Erbil Mr.Salar Mahmoud, head of the Human Rights Commission of the Parliament of the Kurdistan Region of Iraq, was received by Mr. Hamid Murad, president of the Iraqi Human Rights Society in the United States of America. Mr. Salar Mahmoud highlighted the work of the Committee in the Parliament as a regulatory, legislative mission: through the control of the prisons, the search for the outcome of missing persons, the compensation for victims of human rights violations, the question of the death penalty, the law of amnesty, the subject of displaced, and the return of displaced Iraqis from European countries.

At the meeting, Dr. Thaer Abdul-Ahad, a member of the Parliament of the Kurdistan Region, was present. Mr. Hamid Murad urged for the need for civil society organizations with the Commission on Human Rights in Parliament to serve the aspirations of the community, and to work together to spread the culture of human rights through the curriculum, the media, conferences courses, and intensive workshops for the staff of the executive to improve their performance with the citizens.

Both sides underlined the necessity of cooperation in the next phase between the Assembly and the Parliamentary Committee and at different levels concerning the values ​​and principles of human rights.